8 Things to Avoid When Hiring Salespeople

Hiring salespeople is often a source of frustration for business leaders and executives for several reasons: lack of quality candidates, candidates make a strong impression during the interview but are unable to sell after six months on the job and generally poor experiences with salespeople.

The root of these problems isn't human (although it is becoming human), but rather a process problem. Here are eight things to avoid when recruiting for a sales position.

Most of the time, ads are written by human resources or recruitment agencies who don't know the real sales success factors. Most postings will contain some or all of the following sections:

They are the worst type of posting to attract quality sales candidates because they look like all other ads and don't catch the attention of top candidates.

Instead, your ad should describe the ideal candidate for your position so that high-quality candidates can recognize themselves when they read it.

2. Relying on the resume

Some resumes are more useless than others. I always have more questions about what isn't on the resume (and what should be on it) than what is there. Many resumes are written by professional resume writers and those that aren't, contain errors that disqualify candidates early in the process.

Be careful; good salespeople don't have perfect resumes! Remember what you are looking for: people who can sell, not a perfect resume.

If you can't stand people who make mistakes when they write, look at it this way: if a resume doesn't contain errors, it may be that the author spends too much time in front of his computer and not enough talking to potential customers on the phone or face-to-face.

3. Looking for candidates in your industry

Many leaders confuse "in my industry" with "compatible with the criteria of my industry." Candidates in your industry (and therefore with your competition) aren't usually the best. Moreover, you will often need to offer a 20% bonus to attract these salespeople, because most of them won't want to take the risk of changing (salespeople aren't entrepreneurs and take less risk).

Instead, look for sales candidates who have had success under conditions similar to those in your market or industry. For example, if there is a lot of competition in your industry and your products are considered commodities, I will look for a candidate who has successfully sold commodities in a highly competitive environment.

4. Hiring a candidate with a lot of contacts

I've seen a lot of business owners get excited about a candidate who has a full address book and wants to come and sell for them. When this happens, the owner lets his emotions speak. He or she systematically overestimates the ability of the candidate who currently works for the competition to get new customers (see point 3).

Your goal is to make selling a repeatable process that you can teach new salespeople who have the strengths, skills and abilities to replicate this process.

5. Using the wrong types of tests

Most companies and recruiters (including those who specialize in sales) don't use evaluations, and there is a good chance that if one is, the success rate is low - even if it's a test for "sales."

The reason why success rates are so low is that 95% of these tests aren't explicitly designed for sales, but rather adapted for sales. It might sound like I'm splitting hairs, but let me explain: tests adapted for sale were initially designed for something more general, often to evaluate managers. Companies that developed these tests saw the opportunity to use them for sales, so they adapted their tests by merely including sales vocabulary.

The problem is that under the hood, these tests haven't changed and people are evaluated the same way. For example, the trust sought in a production manager is very different from the type of trust needed for success in sales. These adaptations often occur with personality or behavioural tests, yet figures show that there is no correlation between the personality or social behaviour of individuals and their success in selling.

In contrast, tests explicitly developed for sales and sales management (like the sales force evaluations Prima Resource uses for example) have proven predictive value and will tell whether candidates will succeed in selling for your company.

Salespeople, even bad ones, are used to interview situations. They become excellent at giving a very positive first impression which is what drove them to sales in the first place. That's why you can't rely on the results of traditional interviews.

Most of the time, the candidates you are interviewing have been in more interviews than you and, therefore, it won't be long before they take control of the conversation. In fact, most business owners don't even interview; they introduce their business to candidates. Stop presenting or interviewing and start auditioning!

To know how a candidate will behave in front of a prospect, you need to reproduce what they will face in the field during the audition.

The track record of a candidate in previous positions doesn't predict success in your organization. If you don't pay attention to the conditions under which the candidate has succeeded, it is possible that the person will fail in your company, especially if the candidate has benefited from intangible factors in his or her last positions.

Here is the classic example of the numbers trap: you audition a "good" candidate for a position that needs to seek new business opportunities when in his old position the majority of leads and accounts were transferred over, and he or she had no prospecting to do and has terrible prospecting techniques. Another case is where a candidate is recruited into an underdog company when the previous employer was the industry leader, and 50% of sales were directly attributable to the brand itself, not the rep.

Use the reference check as a confirmation, not to make a decision.

Learn how to avoid these and other hiring mistakes. Hiring the wrong salesperson costs companies a lot of money. Discover how to hire good salespeople. 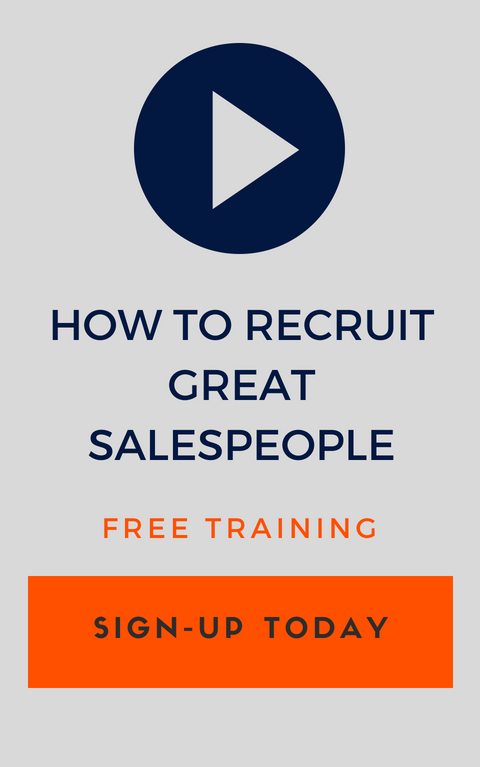