Coaching representatives should be of paramount importance to sales managers. As we’ve often stated in our articles, 50% of sales managers’ time should be allotted to this task.

To maximize every session spent with each salesperson, the sales manager must effectively plan, in advance, which topics to address as well as how to measure the coaching’s effectiveness.

What is sales coaching? In this guide you'll learn:

Becoming great at selling - or anything else for that matter - is about making adjustments. To make a change a rep needs feedback - something they see, hear or feel that informs their ability to adjust. Sales coaching is a potent form of feedback. Data shows that sales managers who spend at least 50% of their time coaching AND are effective at coaching have salespeople who are 49% more effective.

Which areas are most impacted by coaching? Qualifying and Closing.

Only 10% of all sales managers are both consistent and efficient with their coaching. For salespeople who wish to improve and become great, most of them will need to accomplish some or all of that work on their own, either by recording calls, signing up for training or getting a sales coach.

Sales managers should spend 50% of their time coaching to opportunities, and coaching on strategy, tactics, and pipeline. They should be coaching up their salespeople, and they need to be great at it.

Is any of this happening?

According to the CSO Insights 2018 Sales Study, just 10% of the companies said that coaching was a strength. That figure is in line with Objective Management Group's data from its evaluations of more than 25,000 sales forces. Only 10% of all Sales Managers have the Sales Coaching competency as a strength, but most of that group are in the top 20% of all sales managers.

In fact, OMG's data consistently shows that sales managers aren't spending enough time coaching their salespeople and when they do, the coaching is weak.

There are several reasons for this:

-- Source: The Latest Data Shows That Sales Managers Are Even Worse Than I Thought

When should you coach your salespeople?

There are several coaching opportunities available to sales managers: during weekly funnel reviews, when preparing for a prospect meeting, during post-call coaching session, when leading sales pipeline reviews, or even during a team meeting. Managers can also use sales co-development sessions to develop their sales force.

Regardless of the type of coaching, these guidelines orient all types of coaching:

How often should you coach your sales reps?

Coaching can be done on an ad hoc or regular basis. In the first case, the director will accompany the salesperson along the stages of the sales process, and this, with different prospects.

However, coaching to instill a specific skill will require repeated coaching. A coaching plan will have to be drawn up so that several sessions are devoted to the same topic.

To plan each session, the sales manager must first know the salesperson’s skill level for each step of the sales process. To this end, it’s strongly recommended to use a sales evaluation tool, such as the one offered by Objective Management Group (OMG).

The results of the evaluation provides a clear picture of the salesperson’s ability to:

The sales manager will quickly identify the item(s) on which coaching efforts should be focused on with the salesperson.

Some CRMs, such as Membrain, allow the integration of the sales skills assessment results. The director can then identify the coaching elements to work on, in parallel with an ongoing sales process.

This offers the advantage of not having to constantly refer to the evaluation, the information being accessible directly in the CRM.

To facilitate preparation, the sales manager can use the results of an OMG evaluation as a reference source, as well as the steps of the sales process. Sales DNA is also to be considered when coaching representatives.

More specifically, here are several examples of topics to address:

In any case, here are two rules to follow:

How to determine which topic to prioritize

The manager must determine at what height to place the bar, in other words, where the salesperson is at in terms of sales competencies. The coach’s role is to ensure that this bar is constantly rising.

Although very beneficial for coaching, some managers don’t dare role-play because of certain fears. They often simply don’t know how to do it.

You must understand that role-playing is a three-step process.

This role-play sequence can be used to prepare for a 1st base meeting, in anticipation of a prospecting call, or the presentation of an offer.

It’s recommended to use role-play when a salesperson lacks a certain competency.

Of course, it’s always possible to start with a more standard coaching approach, where the manager invites the representative to share their objectives and preparation for a meeting or a call. The role-play comes in afterwards, if it’s deemed necessary to improve a specific competency.

The advantage of role-play is that it allows the salesperson to experience and practise real-life situations.

Ideally, the sales manager who aims for consistent coaching should not only have a coaching plan, but should develop it in collaboration with the salesperson. In certain companies, a plan for every salesperson must be presented to the president.

At the beginning of each month, the manager asks the salesperson to identify which item(s) they would like to examine. It may be two or three skills, though one suffices.

The manager will then ask the representative to lay out their action plan. It can include coaching, role-play, and various self-teaching methods.

A constant measure of results

The results are measured at the end of the month. First, a qualitative follow-up is done on the co-created plan. How did the last few weeks go? What difficulties were encountered?

If the competency involved is measurable, a quantitative assessment can also demonstrate the progress that was achieved.

Monthly revision of the coaching plan

Considering these observations, the action plan for the following month is developed. Specific questions guide which actions to take:

The sales manager can also benefit from coaching. Presidents and Sales VPs sometimes develop a plan in conjunction with their managers to improve their skills.

In fact, why not apply coaching to all directors, even those not involved in sales? Everyone can, and should, benefit from it!

Note: This post was originally published on October 5, 2018, and has been reviewed and revamped for accuracy and comprehensiveness. 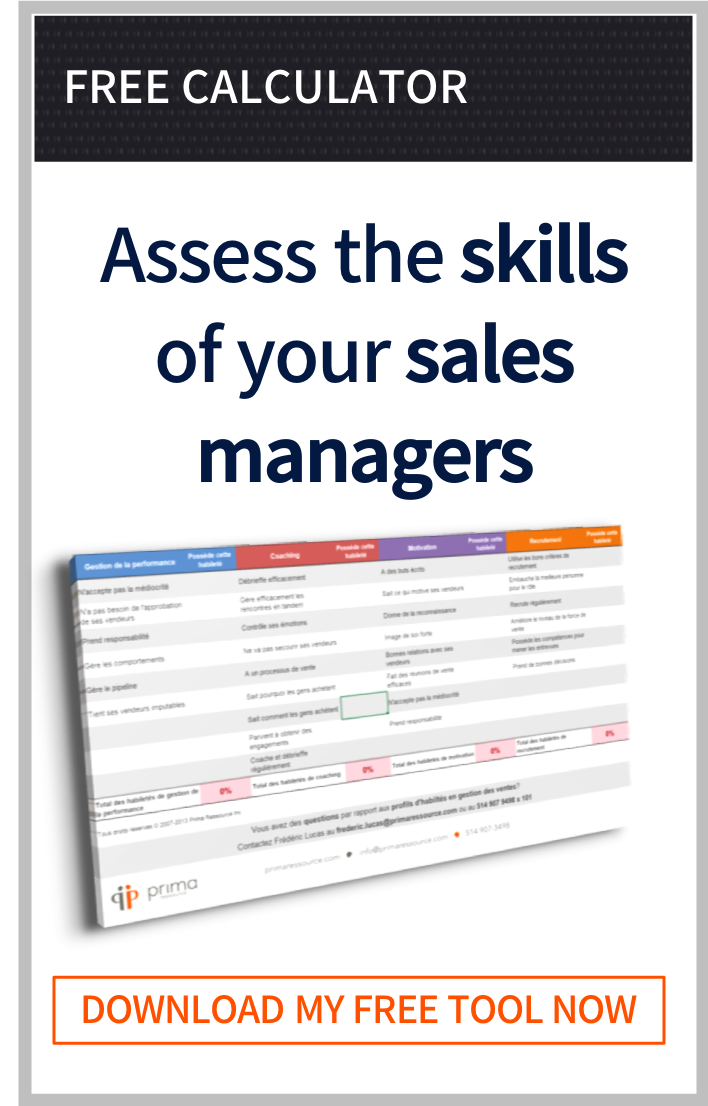