How to Reach Decision Makers

It takes more attempts to contact the decision-maker than it does to talk to a buyer, end-user or influencer in the purchasing process. However, the additional time required at the very beginning of the cycle is mostly offset by a shorter sales process when it's conducted directly with the key decision-maker.

There are two problems related to reaching decision-makers:

The decision-maker usually occupies a high-level position within the company. They're often in senior management so representatives must be encouraged to aim as high as possible in the company during prospecting.

Reps must make every effort to identify the person who's going to make the ultimate decision. Unfortunately, merely asking the person they're talking to won't cut it.

By asking who the decision-maker is, reps will usually get a spontaneously answer like: "it's me!" Most of the time it isn't true. Employees seek to protect their turf.

Moreover, it can be easy to confuse the decision-maker with the buyer or an intermediary who doesn't have the final decision-making ability.

It's by determining the roles and responsibilities of each person that it becomes possible to recognize the real decision-maker, either during prospecting research or during the first call.

Also, it's common for a representative to be referred to the project manager as the one in charge. Watch out. Even if the project manager is the one to whom the technical sale is made, he or she often reports back to a superior responsible for the budget, from whom he or she must obtain approval before the purchase.

It's the latter person who's the real decision-maker so it's to him/her that the salesperson must speak with.

According to Objective Management Group data, when salespeople successfully reach decision makers, opportunities move forward in the pipeline and reach the conclusion stage, often resulting in success. However, most salespeople don't reach the real decision-makers and it's these opportunities that lose traction or result in a loss. 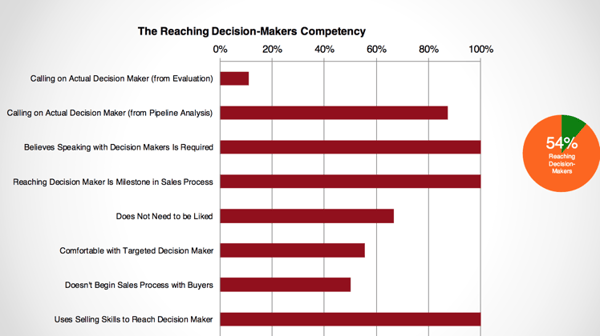 The results in OMG's table above are typical of most evaluations. The table looks at two facets of the same attribute related to reaching decision-makers.

The first bar demonstrates that the majority of these salespeople believe it's crucial to reach the decision-maker. They see this as an essential step in their sales process. They have the sales skills to reach decision-makers.

But the second bar shows that they can't do it.

The table below shows three attributes related to the ability to reach decision-makers:

5 implications of not being able to reach decision-makers

1. Reps don't know how to identify the real decision-maker

Generally, the person targeted by representatives are intermediate managers, end-users or buyers.

Real decision-makers experience a problem directly or can detect an opportunity. Also, they have the authority to make their decision and the funds to act.

Just because it can take many attempts to reach decision-makers doesn't mean they're inaccessible. Of course, phone calls can be screened, but it's possible to get through these roadblocks by turning gate-keepers into allies.

Also, contacting executives through social efforts can be useful. For example, you can connect with potential customers on LinkedIn, Twitter or any other platform they use.

Different people have different types of personalities. It's the same for executives. Many representatives are reluctant to prospect with these leaders for fear of being confronted with direct refusals.

In sales, rejection is a constant, that's why salespeople have to learn to manage it.

4. Representatives think it's inappropriate to ask them questions

Thinking that asking questions is inappropriate is a limiting belief that affects sales performance. The preconceived notion is widespread.

The truth is that senior executives generally like to meet people who can stimulate them from a business perspective. They'll be attentive to representatives who show that they know the problems they are experiencing and who bring a different and external perspective to their situation.

It isn't a question of asking what the problem is and switching to presentation mode. Instead, reps should address these leaders with specific business issues that place them at their level.

5. Salespeople think their prospect's time is more valuable than theirs

Lack of time is the most common argument (or excuse) used by reps to avoid outreach attempts.

The worst thing to do with leaders that say they don't have much time is to apologize. If reps do this or if they're too accommodating, it creates an imbalance in the exchange.

If managers need to spend their time on what is useful and profitable for the company, the same is true for salespeople. Neither party has an interest in wasting time, which puts them both on an equal footing.

There's no need to have a detailed conversation during the first call. As soon as reps can identify an executive's problem that they want to solve, they can ask for the time they need to have a real consultative sales conversation - roughly 90 minutes.

How to reach decision makers

Reaching the decision-maker requires a lot of technical know-how. A rep's ability is often tested by an intermediary with a mandate to gather relevant information before presenting salespeople to his or her supervisor.

During this necessary step, the representative must be able to determine whether this individual can become a leading ally... or not.

Preparing a tool for the intermediary like a list of questions to ask can be very useful for the salesperson who wants to stand out and establish a trust relationship.

Should reps give gate-keepers more information about their products or services?

Yes, but only after the rep established a strong relationship and is confident that the product or service will be presented and recommended to the decision-maker.

However, reps should always remember that the role of a salesperson isn't to educate!

Salespeople need be able to recognize and understand the elements that the intermediary will present, how they'll present and to whom. He or she should also try to learn more about the decision maker's selection process. Will he/she be able to get a call with the decision-maker?

Ultimately, the objective is to check whether the intermediary to whom the salesperson is talking can convince the manager to take time with the rep to discuss further.

If, after 15 or 20 minutes of discussion with the intermediary, a clear plan to meet with the decision-maker or a director isn't established, it's better to try to bypass the gatekeeper to contact the targeted person directly.

What are the sales skills needed to reach decision-makers?

One of the most common causes of deals falling through is not talking to the real decision-maker. The main consequence of this inability to reach the key person for the purchasing process is a significant increase in the length of the sales cycle.

OMG data shows that if salespeople could correct only one thing - the ability to reach decision-makers consistently - they would see a massive difference in their results.

It's one thing to know the problem and its impact on the results. Solving this problem isn't easy. Reaching decision-makers is only possible with:

Salespeople must succeed at all costs when it comes to reaching decision-makers. They must plan their request perfectly. Otherwise, they risk being ignored.

In short, reaching the decision-maker requires specialized technical work and excellent skills. Fortunately, it is possible to identify areas for improvement through a sales force evaluation. This assessment will determine whether your representatives are selling at the right level of the company and whether they can reach the right person.

Training and sales coaching are then ideal to help salespeople acquire better strategies and tactics, which will enable them to reach decision-makers in companies. 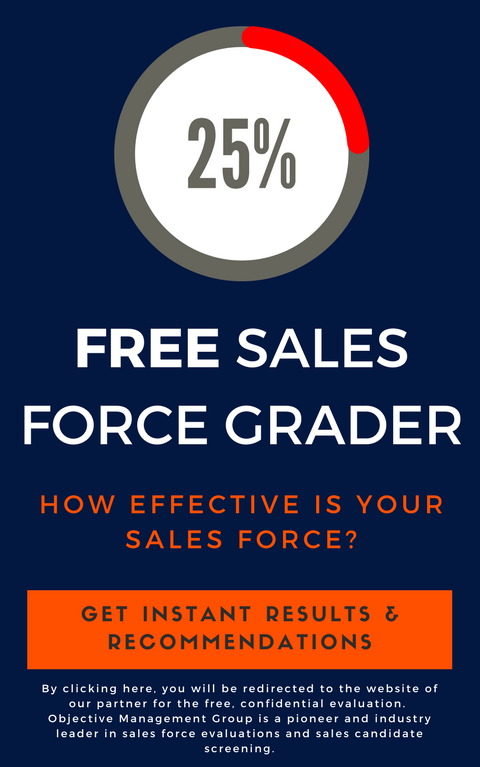