How to structure your sales representatives' coaching

Coaching sales representatives is essential for sales manager. As it is often said in our articles, a sales manager should spend at least half his time on this beneficial task.

In order to be productive, each session with a representative must first be well planned. The sales manager must establish in advance the topics to be covered and the ways to measure their effectiveness.

When should you do coaching?

Several coaching opportunities are available for the sales manager: during the weekly pipeline review, pre-call strategizing meetings, a post-meeting debriefing, a team meeting, and more.

Overall, the following guidelines apply for all types of coaching:

How often should I do coaching?

Coaching can be done on an ad hoc or regular basis. In the first case, the director will accompany the seller through the rest of the sales process for the various prospects.

However, if you are aiming to develop a specific skill, it will require repeated coaching. A coaching plan should be developed so that several sessions are devoted to the same topic.

In order to plan each session, the sales manager must first know the salesperson's level of competence for each step of the sales process. To this end, it is strongly recommended to use a sales skills assessment tool, such as the one offered by Objective Management Group.

The results of the evaluation provide a clear picture of the seller's ability to:

The sales manager will thus quickly identify the element on which he should focus his coaching efforts with the salesperson.

Some CRM, such as Membrain, allow the integration of the results of a sales skills assessment. The director can thus identify the elements to be worked on in coaching in parallel with an ongoing sales process. This has the advantage of not having to constantly refer to the evaluation, as the information is accessible directly in the CRM.

Determine the objectives of the coaching

To facilitate his preparation, the sales manager can use the results of an OMG evaluation as a reference source, but also the steps of the sales process used. The sales DNA is also to be considered for the coaching of representatives.

More concretely, here are several examples of topics to be addressed:

In any case, here are two rules to follow:

It is very important to work on only one element at a time. For example, the salesperson must know how to identify a problem at the customer's site and make an appointment over the phone to get a 1st base meeting.

You can only coach a salesperson on a new element if he or she masters the first one. For example, the salesperson must be able to identify a problem and make an appointment over the phone before being coached on how to ask questions.

How to determine the most important subject to be addressed?

Coaching should focus on elements that are at the seller's level, not above. There is no point in coaching a seller on how to make an offer if he is not able to get to the first goal.

The manager must determine the height of the bar to be crossed, i.e. where the seller stands in terms of sales skills. His/her role is to ensure that this bar is constantly raised.

Although they are very beneficial in coaching, some managers do not dare to engage in role-playing because of certain fears. This is often because they simply do not know how to proceed.

Thus, it is important to know that a role-playing game is performed in three steps.

This sequence of role-playing games can be done in coaching to prepare for a first-purpose meeting, in anticipation of a prospecting call or bid presentation.

When to do role-playing games

Role-playing is recommended when a salesperson is not proficient in a skill.

Of course, it is always possible to start with more standard coaching where the manager invites the representative to share his or her goals and plan for a meeting or an appeal. The role-playing takes place as a second step if it is necessary to improve a particular ability in a salesperson.

The advantage of role-playing is that it allows you to immerse yourself in reality and thus move from theory to a very concrete situation.

Ideally, the sales manager who aims for constant coaching should not only have a coaching plan, but should develop it in collaboration with the salesperson. In some companies, a plan for each seller must be submitted to the president.

At the beginning of each month, the manager interviews the seller to find out what element(s) he would like to focus on. It may be two or three skills, but only one is enough.

Then, he will ask him to define his action plan. This can include coaching, role-playing, but also various readings.

Results are measured at the end of the month. First, a qualitative feedback is made on the co-created plan. How have the last few weeks been going? What difficulties were encountered?

If the competency involved is measurable, a quantitative evaluation can also show the progress made.

Revise the plan on a monthly basis

In light of these observations, the action plan for the following month is developed. Specific questions guide the actions to be taken:

A line of thought...

The sales manager can also benefit from coaching. Indeed, company presidents sometimes develop a plan jointly with their managers to improve their skills as well.

And then, why not apply coaching to all managers, even those not working in sales? Everyone can benefit from it! 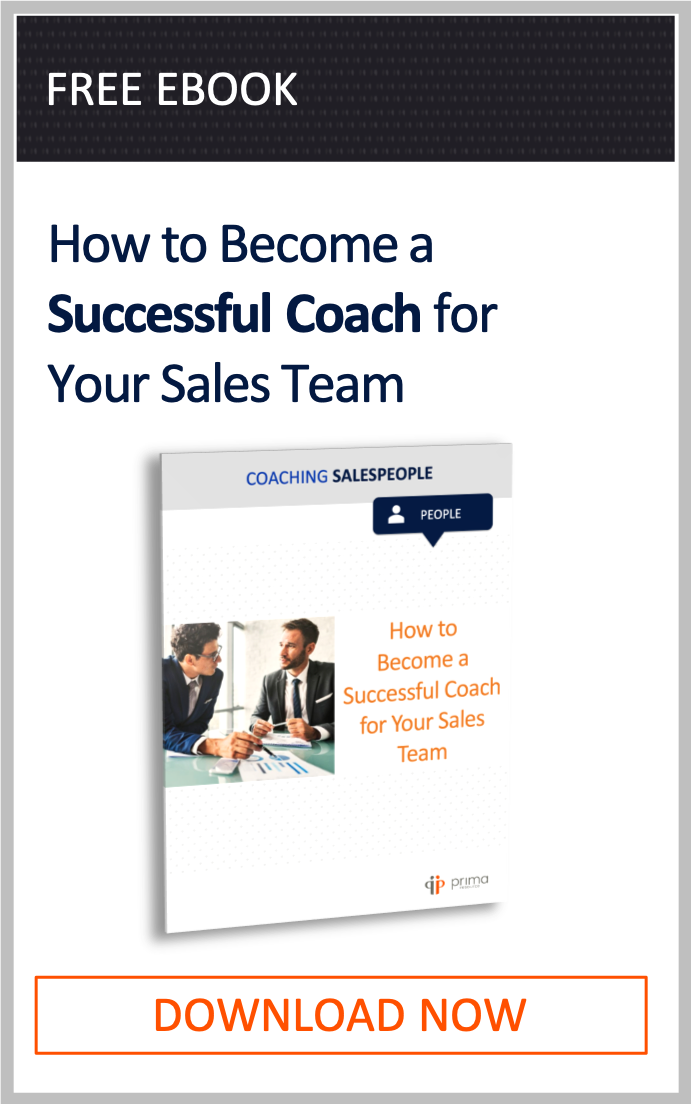